I've logged in to post about another topic, but figure I will provide a brief Curly Girl Method update after nearly one year!

I've stuck with it - no blow drying (other than diffusing) or straightening, and have been using only CG friendly products.

Winter was frustrating at times, but much better after I discovered the need to leave in a fair bit of conditioner and go easier on other products. Now that the summer humidity is returning, I'm getting better volume again, with more uniform curl and more days on which I can "refresh" a little rather than re-wetting my entire head and starting over with styling.

My biggest problem is the pixie grow-out - I can't resist trimming frequently to maintain some shape and volume at the top, and keep bulk out of the bottom half. I want to keep the back longer and work toward more of a longer shag type style, but maybe I'll need to go with a bob first, while it grows longer around the ears, then let the back catch up. Sometimes when the shorter look is working I am tempted to go back to a longer-on-top pixie. I've always changed styles often, but wearing it curly makes me think twice about dramatic short cuts at the moment, as the grow-out feels even slower wearing curls - they grow out first, rather than down (sometimes creating volume in the wrong areas), then will hit a length where they start to drop or fall downward (creating some altogether odd combinations of shapes and differences in how the curls sit).

Pixie grow-out or not, keeping volume in the crown can be a challenge both if layers are too short (sections pull up and away from areas where I want coverage) or too long (sections fall flat from the root). Root clipping on damp hair seems to work best for this, after diffusing a little. Diffusing is helpful, although doing just enough to start getting some lift, while not over-doing it and ending up with dry, undefined, frizzy sections is an art. Sometimes dampening and finger curling sections that got a bit frizzy while diffusing can help.

So there it is. An ongoing experiment, although overall still generally more content with my hair than I have been in a long time. 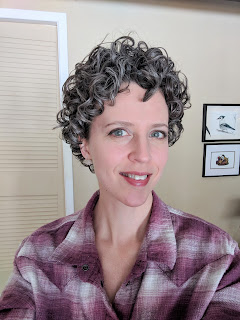