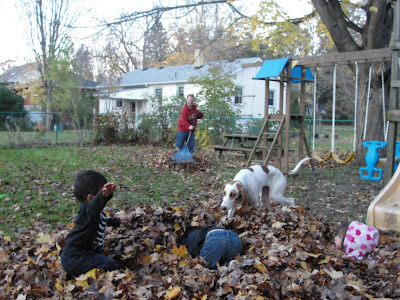 At first it was a casual observation on my part, but later I realized the significance, however subtle...

This morning, at our town cenotaph during Remembrance Day ceremonies, a man (friendly, holding a printed program, so having something to do with the event) moved over to stand by me and the kids (me on one side of the boys, this man on the other), who were a little removed from the crowd, smiling and greeting us. And my boys, without hesitation, looked at the man, then up at me, and came over and physically leaned against me while holding my gaze and sneaking one or two more small glances toward the man.

I nearly missed it, maybe because it felt so "normal" to have my kids take cover in this way. But I am glad I noted their response, because this was new for our boys, who typically greet (and sometimes seek out) complete strangers with enthusiasm and confidence (which has included calling out to people from a distance to say hello, losing themselves in interactions with other adults - often strangers - without so much as a glance our direction, going off on their own in public places without checking in with Geoff and I, throwing themselves onto people they may have met once, etc.). Occasionally, Lute will play shy with someone (although often that seems to be a bit of a control thing around people we want him to greet), and just this week Kitch asked me twice about whether someone was a stranger (a cashier) and about receiving a greeting from a stranger (a fellow shopper)...but usually they will dive into interactions with just about anyone (and to be fair to the boys, other unknown adults are really inappropriate about approaching our kids and asking personal questions of them - names, ages, etc., taking their hands, and so on - what's a kid to do, when the adults are modeling these poor boundaries?)...

Anyway, I thought to write a quick post, and add this observation to our patchy written record of events in the first months of family life (which, by the way, is approaching 5.5 months of being home together, and has been nearly 7.5 months since meeting...wow - more than half a year of knowing each other).

Moments like this are humbling, actually, because the boys' action today followed a not-so-pretty leaving-the-house scene (a stress/frustration trigger for me at times, let me tell you). A child's ability to attach to people who spend half their evenings lamenting less-than-perfect parenting responses and reading up on how to do better next time, and to one parent in particular who is admittedly a bit reserved in her own attachments and affections, is pretty amazing. But that is a post for another day...maybe.
Posted by Joy at 16:18 6 comments: 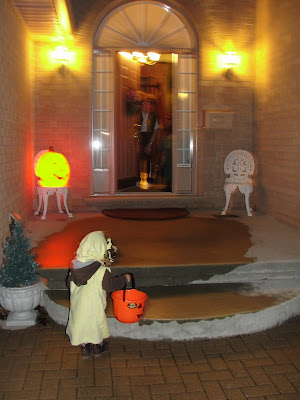 Our 19 month-old baby lion insisted on independently following along with big brothers (a dino-dragon and bat), carrying her bucket up stairs and down, opening and ingesting three mini-chocolate bars while in the truck in transit (oops), and altogether proving her readiness for the Trick-or-Treating festivities. After leaving Grandma and Grandpa's (pictured above), she spotted some older kids up the street, and took off down the sidewalk after them in an effort to avoid returning to the truck with us...
Posted by Joy at 17:35 1 comment: