Way back on June 14, I wrote about risk in adoption, particularly when the parent hopes to adopt a healthy child who is developmentally on target and does not present with significant "issues" overall:

"When signing up to adopt a healthy infant through international adoption, I wonder to what extent adoptive parents REALLY consciously consider the unknowns and say "yes" to those possibilities. You know, anything from attachment issues to genetic/organic developmental delays which might not be immediately apparent, to unknown biological family mental health histories which could surface in our children. I suppose anyone who has a child, no matter how that happens, is saying "yes" to some of those risks, and to others, and hopefully in a conscious way...

...In international adoption, things are complicated in part due to the possibility of very limited family and developmental history, and the inability to meet and interact with a child before adoption decisions are finalized..."

Having dipped a toe or two into the domestic public adoption world, things look different. Essentially every child profile contains at least an inkling of "issues" - whether due to trauma, pre-natal substance exposure, multiple caregivers, developmental and genetic conditions, or other factors. Unlike in international adoption, the "yes" parents say to various possibilities in public adoption is more direct, more intentional. Sure, in international adoption, parents specify openness to possible issues, but I am still thinking more here about the unknowns...the things that cannot be seen or predicted.

Perhaps it is empowering for parents to have this kind of background information about their child. It certainly forces a prospective parent to move beyond the hypothetical "yes", to making an active decision to consider various factors. And at the same time, I wonder if availability of choice also complicates things - causing us to over-think issues or let doubt creep in.

One of the big factors in many public adoption situations is the known, suspected, or unknown (meaning, it cannot be ruled out) use of substances, including alcohol, by the mother during pregnancy. Fetal alcohol-related disorders and symptoms certainly vary from child to child, but can be unpredictable. Long lists of possible difficulties are easily available. And, FASD cannot be ruled out in the early years, even if the child does not currently demonstrate any signs. I will admit that it all sounds a bit frightening.

And then...I consider how serious attachment difficulties, trauma-related behaviours, and other issues can also sound/be quite intense and overwhelming as well. But by signing up for international adoption, I have said "yes" to the possibility of any of these things.

Today, though, I am curious about FASD, mostly because it is something I haven't spent as much time contemplating and researching, having focused more on development, post-birth trauma, and attachment, among other topics. Is FASD more of a monster than developmental delay, trauma-related issues, attachment disorder, or other issues that might creep up unexpectedly? Is it something to say "no" to, even if the answer to the other possible issues is "yes"? And...if FASD seems to big or scary, then I suspect the "yes" to potential attachment and trauma issues should be re-evaluated, too. And I'm not saying it is too much, I'm just wanting to think it all through, and maybe hear some other thoughts.

I have always wanted to adopt. I believe that I realize many of the risks, but don't want those to stop me from experiencing the potential beauty as well. I don't believe we are meant to play it safe and protect ourselves from challenges in life...but I also know we need to be wise, recognizing our strengths, and also seeing where others may be better suited to the task at hand.

Thanks, Fall Fair, For Our Annual Self-Esteem Boost! 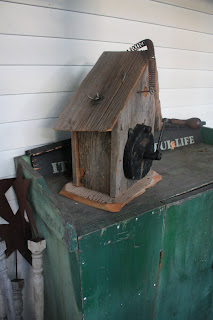 As always, the fall fair crept up on us - it's very sneaky.

Thankfully, we have a few things waiting around, finished or nearly finished.

Literally at the last moment, I realized I had way of entering some bags (none of the categories fit...until I realized that three appliqued bags could be a "hobby collection" using the same technique. Yay!).

We ended up submitting:

Joy - Bag collection
Joy - Necksessory (necklace) (see January 27, 2010 post, "In Stitches")
Geoff - Birdhouse
Geoff - Fox (see January 27, 2010 post, "In Stitches") (he also had enough items for a hobby collection, but we would have had to run to my sister's to steal a couple things he made for my niece, and there wasn't time)
Both of us - Photos of various descriptions 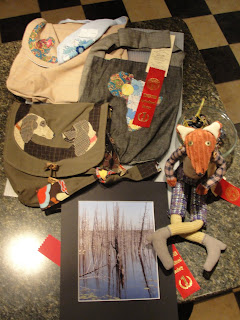 I think somebody must have been concerned we'd have it out if there was a prize imbalance between the two of us. We came home with two, first-place ribbons each!

Geoff won for both his fox and birdhouse, and I for my bag collection and marsh photo (See June 26, 2010 post, "Backpacking on the Bay").

When we were dropping off the entries, it appared Geoff had some stiff competition in the garden decor category, and we didn't see many other entries, so weren't sure what else was being judged until after it was done. 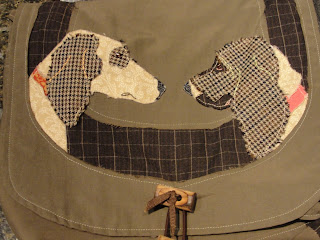 I have received a few second-place ribbons and a third or two in the past, for photos and hand-crafts (a cross-stitch sampler which was also a last-minute entry). Geoff has been cleaning up with firsts for his birdhouses the past couple of years. 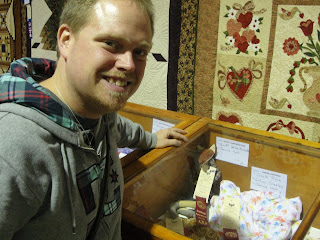 I used to work with two folks who happen to be on the fair committee (a bit strange, as we border a decent-sized city, and I worked in the city, and this is a large country fair, but not the city fair - although there is one of those, too).

Anyway, I started out submitting photos, for fun, since I take so many of them. (Basically, it gave me lots of excuses to take even MORE pictures. Ok, if you insist)! Then I entered in handwork, and once Geoff started building birdhouses, I encouraged him to enter as well.

I am thinking the time will soon come when we will be competing in the same categories. It's pretty much inevitable. If anyone has great (subtle) sabotage ideas, just let me know. 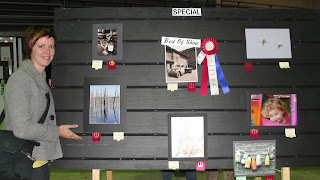 So, a good time was had by all. I did notice that the best of show photo, and a number of handwork entries, were submitted by someone we know from church youth group, back in the day. And I was up against one of my former colleagues in the hobby collection category for the first time. Just how a country fair should be - just like the old days, neighbour against neighbour!

Now to start researching livestock options to bump it up a notch for next year...
Posted by Joy at 13:09 No comments:

Labels: In Other News, Things That are Important to Us

Geoff and I seem to be a bit lacking in observation skills (and what comes after making observations...like knowing when to investigate further and perhaps involve someone else).

Last Thursday we arrived home and noticed a shiny, wet spot in the road (a local highway) in front of our house. Odd. Must be some sort of oily substance which spilled from a passing vehicle or trailer.

Then Sunday there was a big wet area on the road. Odd. But it rained earlier, so must be some sort of low spot.

Then today, still a big wet spot. But no rain. Huh. Whatever, then. Off to see a client.

And apparently I work with water so little (and our water pressure is so poor to start with) that I failed to notice a drop in water pressure. And would likely not have had the wherewithal to link reduced water pressure with wet spot on road. But hopefully I would have. But maybe not.

Then this afternoon there was a water company vehicle in front of my house. And then a utility locator vehicle across the road, putting up little yellow and orange marker flags. Then the hydro truck in my driveway. Hmm...

So, I mustered up a miniscule bit of confidence, grabbed a watering can and headed to the front yard - to make it appear as though I was just out front to water the mums...oh, hello utility locator, had no idea you were here in my front yard...I'm just out watering the mums, as you can clearly see...but since I'm out here, and you're out here...I may as well inquire - looks like some kind of work about to be done?

Well yes, as a matter of fact, there seems to be a water line leak, which will require the road (and some of my front lawn, and the sidewalk) to be dug up. The utility locator man said he figured we must not have any water to the house. But we do (because I likely would have called somebody about that). And then I mentioned something about noticing the spot yesterday (Sunday)...and he said, "Oh, so it was there yesterday, too?" So I didn't mention that it had actually been there since at least Thursday (and that we had just been making up various explanations to satisfy ourselves about this mystery).

Later, the nice water company man came to the door with a notice that water will be shut off tomorrow for about 8 hours, off and on. Hoping I remember to fill the tub tonight for an emergency toilet-flushing and hand-washing supply. And that I remember to shower bright and early. At least I'm on the road a bit for work tomorrow, and will likely avoid most of the construction and lack of water....

Seems the water main across the road looks ok, and that our own personal water line coming off the main is to blame. The water man wondered if we had noticed reduced water pressure. But, as I said, my powers of observation are a bit weak. My brother, however, has noticed it, but has not said anything. The water man commented that this has likely been deteriorating for a long time. Over 10 years, maybe? - because that would be good...it has always been just a little unsatisfying to shower in our house, and we kept blaming things along the lines of old houses and inefficient/odd plumbing networks, etc., etc. I guess we will soon find out.

And this may be the most completely non-adoption-related post ever. But that is to your benefit, since water leaks are way more interesting and eventful than our adoption situation at the moment.
Posted by Joy and Geoff at 16:53 3 comments:

Labels: Things That are Important to Us
Newer Posts Older Posts Home
Subscribe to: Posts (Atom)