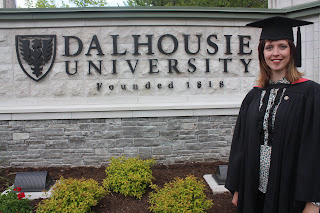 Hmm, so we were in Halifax for the weekend to attend my Master's convocation (at last!), and since we flew there and back, I figured this would be good practice for eventual travel to Ghana. I don't really like flying for a number of reasons, but was quite pleased with the very relaxed and smooth flights to Halifax. If that had been the end of it, I would have been delighted with my progress! Unfortunately, we had to fly back.

For our first leg of the return flight, I was feeling good as we entered the plane, until we realized that for some reason we were not seated together. Not only that, but we had been assigned middle seats. I had been specific in requesting aisle seats when I booked online, so I'm not sure if there were no aisle seats available, or if I made a mistake, and I am really not sure how I missed that detail when accepting the seats. The flight attendant tried to get us other seats, but to no avail. So I sat there, between two strangers, quietly suffocating and wondering how & when I would manage to get to the bathroom if/when necessary. Then the guy in the aisle seat ahead reclined his chair, and the aisle lady beside me put down her tray. TRAPPED!

And then the turbulence started. Actually, I think it had already started. The real "event" happened after the drinks had been served. When the plane dropped suddenly, drinks spilling and arms lifting off the armrests, that pretty much did me in for the rest of the flight. Even the landing felt noisy and rocky, and until we actually stopped moving, I just needed to get OUT.

I found out afterward that poor Geoff was sitting in his middle seat without even the distraction of a working TV screen (which explained why I noticed he didn't buy any headphones, since we couldn't share this time) or book (as he had stowed his carry-on overhead, thinking we'd be switching seats).

Thankfully, the very short final flight on a little plane was smooth, although at that point any bumps and noises were a bit unnerving, so it felt good to arrive at our home airport safe & sound! Not sure I'm itching to fly again anytime soon... 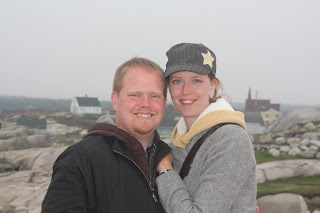 And other than the flying, we did have a really nice time - good weather, and opportunity to hit a few destinations - the lovely Halifax harbour, Wolfville & the Minas Basin (Bay of Fundy/Annapolis Valley area), Eastern Shore (lovely beaches), and Southern Shore (quaint towns & beautiful coastline). It's great to find an excuse to travel east every so often!
Posted by Joy at 18:22 No comments:

Labels: Baby Gear and Preparations, In Other News, Travel

Yes, I shamelessly steal links from other people's posts on blogs and online adoption groups. Just wanted to be transparent about that. One of these days I'll try to find something myself, and then others are quite welcome to "borrow" my link!

Anyway, this short article is about Hugh Jackman's perspective on adoption, where he comments on his own international adoptions, and makes reference to the publicity surrounding Madonna's adoptions.

http://celebrity-babies.com/2009/05/06/hugh-jackman-defends-madonnas-malawian-adoption/
Posted by Joy at 18:17 No comments:

Ok, so this is MAINLY a blog to chronicle our adoption, but since there's no news at the moment, I may as well fill the space with some unrelated "other news" and photos! A consistent side topic since I started this blog has been our pets, the dogs mostly (sorry cats - guess you'll have to spice things up to get yourselves in print more often), but today I am heading into completely new territory to fill you in on the shows we've been to in the past week! And hey, these are things our children will be exposed to when they join our family, so there's some relevance, right?

First, a lovely evening with Diana Krall (wishing I had taken my older, but far "zoomier" Canon S1IS which takes great action shots - sorry Fuji F40fd - you're great for other things, like coming everywhere with me - and in fairness, we were sitting in the closest thing to nosebleeds at the JLC): 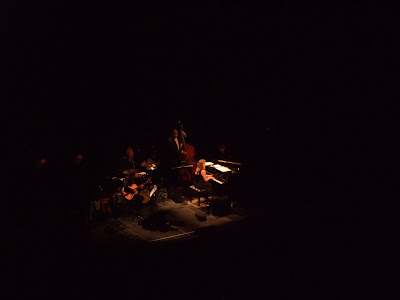 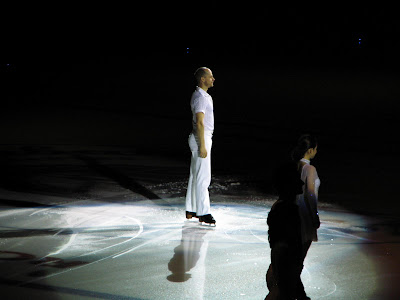 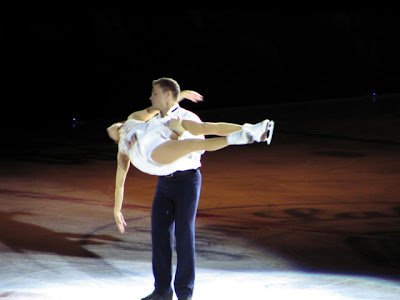 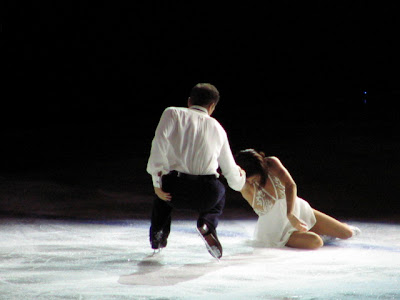 Labels: In Other News, Things That are Important to Us

Wow, second year in a row that I actually made it out into the "wild" during Trillium season - carpets of them everywhere at our Lake Huron campground! 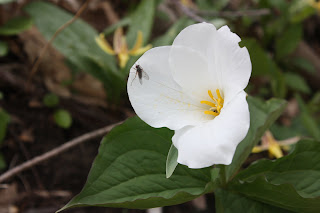 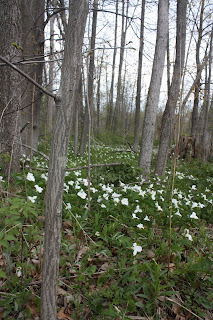 Labels: In Other News

Camping Kick-off...Not Quite as Planned 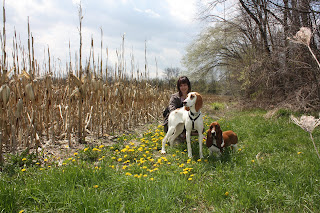 To borrow the trendy 1950s slang term popular in the movie "Mr. Hobbs Takes a Vacation" which we saw last night in the comfort of our trailer on our first camping night of the season...this weekend has been so "weird"...

The campground opened May 1, and we were there by 4:00pm, having left home in good time and having stopped for groceries just before the campground. Well, within about half an hour after arriving, I rounded the corner of the van with a load of groceries, on my way into the trailer, and spotted Gladwyn, roaming free, without her harness, no longer hitched to the sturdy tie-out she had been on since arriving. Sickening, sudden horror. Gladwyn has only been with us for three weeks, and while her timidity is often not apparent with us at home anymore, she is still very skittish and shy, and does not reliably come when called. And here we were, surrounded by forest, farmland, Lake Huron, and highway, in territory completely unfamiliar to Gladwyn. Few people around (and little good that would do with a dog who is afraid of people) as well. Just about the scariest thing I've experienced. She started off in the campground area, almost approached some folks and their dogs, almost came to take a treat from me, but then took the trail up the steep forest slope into the woods. We had left Hesper tethered in her spot at the trailer, unsupervised, while we scrambled up, Geoff in the lead. Both of us truly unsure we would ever see this lovely, frightened dog again, knowing she would not come to us freely. What an utter sense of helplessness and desperation, pleading out loud for divine intervention, and leaving my carefully protected Birkenstocks at the mercy of the deep mud and puddles along the wet trail. After circling after her for what seemed like ages, and almost catching her twice, I finally approached her and latched onto her collar when she left the trails and stopped, huddled in fear amongst some bare evergreen branches. Without a leash, I held onto her collar for dear life while Geoff ran back for a leash, and for Hesper, and eventually Gladwyn calmed enough to enjoy the doggie "junk food" I had grabbed as we headed after her. It still makes me sick to think what our weekend could have been like...but, I have also been oh, so thankful for a few important factors:
- That I saw her leaving, as it would have been so easy for her to slip away unnoticed and simply vanish (it turns out she managed to wiggle free of her harness, which was found still securely attached to the tie-out).
- That she never broke into a full run - despite being frightened and trying to avoid capture, she maintained a trot, occasionally stopping to sniff or to listen to Geoff's pleas for her to sit - we were able to keep her within eyesight through the woods at all times.
- That she left the trail (initially NOT something I wanted her to do) and entered thicker brush, which finally stopped her.
- That she didn't fight once we finally had her, as holding a dog by the collar can be tricky, and she could have initially slipped her collar had she tried hard enough (thankfully we were able to tighten it while I kept a firm grip).
- That we realized the potential for escape now, rather than having a tragic and unexpected incident another time.

And now, we are going to sign her up for obedience classes as soon as possible, while starting some more intensive work at home on behaviours like responding to her name, coming when called, and sitting on command, particularly when stressed. We are also going to research no-escape harnesses, and the gated deck-building is definitely the first priority at the trailer. Wow.

Moving on from that incident, we managed to settle in for a nice evening yesterday, a sound sleep last night, and a lovely day today. Had the dogs out for a couple of trail walks, got some reading in, and enjoyed part of a great campfire (complete with roasted weiners)...but before we reached s'mores time, Geoff's pager went off. So he drove up the hill where he can get cell phone reception, only to pull up a bit later, off & running to get us all packed up so he could get home and head into work on an emergency building call. So here I am, at home, typing, instead of watching a movie in cozy trailer comfort. But I am sitting here with TWO dogs curled up beside me, so I really can't complain! 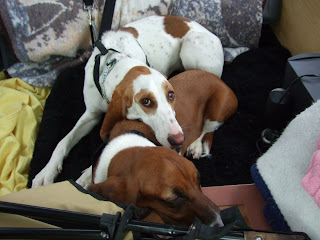