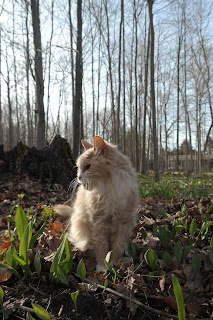 I love this cat (who sits beside me on a box - of course - as I write this. I think we will soon have a visit to the back yard). She has been with me since I still lived at home, and has kept me company at important times over the years - especially after my family moved and I was on my own for a while. Somehow still having her here makes me feel like I am just continuing along in the era of my youth - that perhaps time is not passing as rapidly as I fear most days.

For years during childhood we asked for a cat. Mom wasn't so sure, and Dad, who liked cats, deferred to Mom's preference. When my friend's cat was going to have kittens, I was turning 20, and began informing them that I would be bringing a kitten home. No one argued...at least not with much conviction. Had I been more daring, I would have brought home two - either Spike, her grey tabby brother, or Scully (our name for her...not sure what she was named by her family), her brilliant orange-red sister (who also turned out to have longer hair). I thought I wanted a grey cat, but was captivated by her colouring and chose her over Spike, 20 years ago. Then the fur started growing...and she became an even more unique beauty than I imagined at first.

Of all of my pets, I had a specific dream of seeing her reach 20. She celebrated that milestone birthday last month (March 26 or 27, 2016) - a true gift. I thought we would lose her earlier a couple of times - a case of urinary crystals at age 9, a heart murmur around age 12, dental issues, inefficient kidney function for a number of years, and Easter lily poisoning (thankfully caught before digestion occurred) just after turning 17. Nothing that has resulted in serious issues or ongoing treatment - the only real sign of time passing has been some gradual weight loss and a couple of recurring issues with matting...suggesting at least in part that her grooming technique is not quite as thorough. 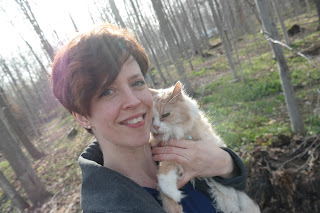 Motet has been pretty much "my" cat...although became more social over the years, with both humans and animals. She holds her own, though, against critters trying to get at her treats and snacks, or Hesper playfully nudging and smothering her with kisses...or little girl as a toddler, sitting on Mo at times.
She has loved sleeping on my head, often kneading my hair and keeping me awake, but bringing comfort at the same time. She has also had a habit of climbing me (not so much the past couple of years, thankfully), quite dangerous with no front claws! She has often enjoyed draping herself around my neck while I sit or walk around. More recently she has been snoozing behind Dad's neck while he sits on the couch downstairs.


A natural hunter, she has been adept at catching mice even when on her tie-out, and even once after moving here, despite deafness and some arthritis. Motet is a lover of the outdoors - we compromised on a harness and tie-out under close supervision (she is also really good at getting tangled up), but she is a good escape artist as well, heading for the door (eventually realizing that stealth was more effective than speed). Since moving here she has had a couple of afternoons of freedom without anyone's knowledge. More recently she will wander with us untethered, enjoying a leisurely ramble in the yard. As a youngster she would escape and run up the neighbour's Magnolia tree...and we dreaded tip-toeing over her lawn to get her down.

For a cat, Motet has been reasonably well-traveled. Mom sometimes brought her along to pick us up from school, and she spent many weekends at the trailer with us. A cat through and through, any new box, blanket, sweater, bag, or remnant becomes a favourite sleep surface. For the past year or two she "moves" regularly - spending a few weeks or months "living" in specific rooms. For a time she was always on a long counter/desk in the family room. She eventually moved to little girl's room, spent some time in my room, and has been hanging out with my parents in the basement since the winter. This week she has chosen my room again.

As a kitten, Mo was mischevious and playful - she would go fishing the aquarium (and more recently has still enjoyed watching them), and loved to play with Muffin, our ageing dog. The two had a marvelous time together. One of her favourite games (before becoming deaf and slowing down a bit over the past couple of years) was crinkle ball "Monkey in the Middle" - I would toss the pom-pom overhead and she would leap into the air to catch it. This week she has been spotted lying on a catnip snake, so the spirit has still been there! Motet has been a constant fixture across a few generations of pets and people - children who were tiny in photos taken with Motet in the early years are now married and have their own children (some of whom are also pictured with Mo). She is a tie to my youth - a time before marriage and career and independent living.

I love her lionesque profile, her ear and foot tufts, her fur ruffling in the breeze. Just last weekend she was chasing a leaf in the yard, and stalking Dan (Dandelion), our current brown tabby (of course she did this for my mother, not me, so I didn't capture it in photos or video). She has an independent and determined streak, more so even than other cats I know. She has always been fine with being held (mostly by me) at times, but if she doesn't want it, well...I am sporting a scratch or two on my neck and chest as I write this. She has not been a lap-sitter, but as noted, enjoys a snuggle on her own terms, on a head or around a neck. In her senior years she amuses us with her focus on the goal - a confident stride to the water bowl, or to the back door to be let outside (or find a way to slip past). Despite some shifts in her habits through her senior years, that personality remains present, and is seen in her routines, activities, and responses to the world around her.

So, yes, I love this cat. My beauty. A cat of many nick-names, but named originally for the Motet, a musical form that reflects my classical music background. Here is a lovely and meaningful Bach sampling:

For the law of the spirit, which gives life in Christ Jesus,
has made me free from the law of sin and death.

Defiance to the old dragon,
defiance to the vengeance of death,
defiance to fear as well!
Rage, world, and attack;
I stand here and sing
in entirely secure peace!
God's strength holds me in watch;
earth and abyss must fall silent,
however much they might rumble.

Hence, you spirits of sadness,
for my Master of joy,
Jesus, comes here.
For those who love God,
even their troubles
must be pure sugar.
Though I endure mockery and shame here already,
nevertheless you stay with me even in sorrow, 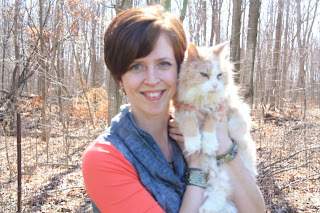