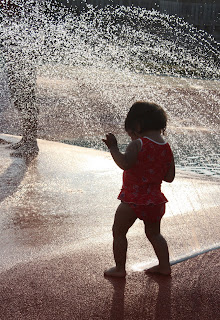 I would love to be more disciplined about journalling little bits and pieces about the kids as they grow and change, because I am well aware that my memory will fail me.

In many ways, I don't see tons of differences in the boys since we met them...but I think that also means I have forgotten a bit already. Because when I really think about it, I suspect a few changes based on earlier, already foggy, impressions. Given the boys' ages, development will be a bit more subtle, but I believe we've seen some language development, and increased sophistication with various skills. They have certainly learned a lot since working on things like basic counting and drawing. We're working on introductory negotiation and other life skills as well (and seeing some progress - like, Mom not having to assist with any aspects of toileting/wiping most of the time - hooray)!

But little Caye, at 17 months old - oh my! Each day, the new words, skills, and mannerisms stop me in my tracks. This week, she has started answering my previously-rhetorical questions with very sincere "ya" and "no" responses. She has already been following simple one- and two-step instructions ("go get your baby and stroller") for a while. Increasingly, she is showing interest in "joining" the boys in play. If the boys go out to play in the backyard, she has started (unfortunately for me), saying "shoes" (shrugging in a "where are they?" gesture) and then going to the door (becoming upset if I am not in a position to escort her out quite yet). She climbs the playhouse ladder outside, and loves to "pretend" eating and drinking. She feeds her bottle to toys and book characters, pets, and family members. She has donned shoes on her own, correctly (ok, a bit of a fluke), a couple of times, and I let her spend the morning with a sundress pulled on over her shorts as a skirt recently, because it was very cute. The best is when she does something like drape Geoff's boxers around her like a toga. Caye loves to kiss the animals, will sometimes kiss me on demand (and always loves to be picked up and squeezed), and is generally cheerful, funny, and affectionate. She is very into pointing (and poking at) body parts, especially eyes and nostrils. I just bought her a water bottle like the boys', and she is totally into carting it around, loving it far more than her sip cups. Caye loves to dance, spin, copy characters' movements on television. More and more of her actions and vocalizations are intentionally goofy and humourous - a few times I thought I was hearing Kitch making various sounds, then realizing it was tiny little Caye.

So, there's a quick glimpse of Caye at 17 months. I must do the same for the boys, too. 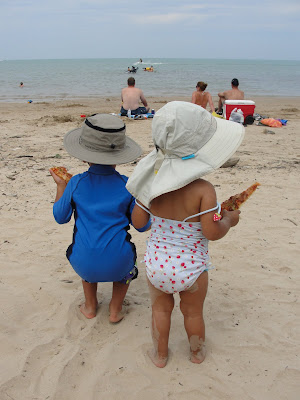 We enjoyed an extra-full, but pleasant weekend. I began to second-guess the wisdom and feasibility of heading to the campground Friday night, but since the keys for our second vehicle had been left there the previous weekend (resulting in sharing my brother's car last week), we headed up for a night, making our first beach trip with the kids the next morning before heading home (I am not a beach-goer, but Geoff has been wanting to take them - he camped and spent time in the area growing up). The kids (at least Lute & Kitch) have been to lakes and beaches, but not a Great Lake. As far as I know, it was also Caye's first big beach adventure. Had a nice dip in the warm water - the only down-side was the sand in our day-old pizza!

One fun thing was running into the craft vendor who tipped us off regarding Aboriginal Day celebrations back in June. She and her partner (and kids) were selling their lovely jewellery on-reserve up the road from the beach. Geoff had a big chat about their plans for children and youth programs in native jewellery-making, drumming, etc., in the city, and he exchanged emails. So we shall see if this connection develops further.

Arriving home, I headed out for a few hours of shopping with my mom (who needed a dress for my cousin's upcoming wedding), while Geoff and my dad stayed with the kids, fed them, and put them to bed. The dress shopping was a success, and it was nice to get out for a bit. My parents were up in our area for the following day - our child dedication at church on Sunday. My sister and her husband were also dedicating their second daughter. They hosted family at their home afterward, so we had a hot, but enjoyable afternoon before heading home to relax with the kids and a Veggie Tales movie (and then renting a couple of us after the kids went to bed - been a while since we've done that).

Ok, so overall not a terribly exciting post, I realize. This week so far we've had rain off and on - which we have not seen much of so far this summer. I'm a bit frightened to realize that mid-August is approaching. I have been aware of the need to put Caye in as many of her pretty summer dresses as possible over the next few weeks of warm weather, make a firm decision (and take action) on school registration for Lute, and get outside for as many summer activities as possible.

We have various events coming up each weekend into September (in addition to at least one night of camping at the trailer each time), including baptism celebrations with our pastor's family (their two eldest, now young adults, are being baptized this coming Sunday, and we have been very involved with them through youth group and a young adults group), a family reunion picnic, a shower/welcome celebration for our kids (an outdoor event at a close friend's property - we gave the green light on that a few weeks ago, and set a date), and then my cousin's wedding in Ottawa over Labour Day (which reminds me, I must make reservations for that trip). Then we're into September, and with it any remaining summer activities as well as the forced beginning of fall and harvest events (ready or not). I've actually been thinking Christmas the past few weeks...not getting ready for the season itself, but really getting down to business on the house/yard/to-do list I've been neglecting, so that I might for once feel on top of things come October and November.

Ok, will stop boring you now. Really just wanted to publish a picture, and didn't need all the rambling chatter, but once I get started, I just keep typing. Oh, and the picture reminds me to mention that the hats are from SunDay Afternoons, and arrived in time to try out over the weekend. I really like them so far - adjustable sizing, lightweight, nice fit, etc. Thought I'd mention it, since I spent a fair bit of time trying to find cute but functional options in neutral colours (although they do have a wide range of 'fun' colours as well).